Example 1: Excitation and Precession of a Single Spin¶

Let us start with a simple example of an uncoupled spin, for which the DROPS display is equivalent to the well-known vector representation. Selecting Spin System ‣ 1-Spin selects a single-spin system. By default, the initial state is \(I_{1z}\) (representing “z magnetization”). The red vector in the transparent red sphere should point along the z axis:

By default, initially, the single spin is seen approximately from the positive z axis, dragging upward results in, for example, the view in Figure Fig. 185. You can manipulate the 3D display directly. Use one finger or the mouse to rotate the display like a trackball, or two fingers to pinch-zoom and rotate. For more information, see Manipulating the DROPS Display.

As shown below, the list of product operators representing the current state contains only the term z, corresponding to \(I_{1z}\). Its coefficient has no imaginary part and the real part is 1. 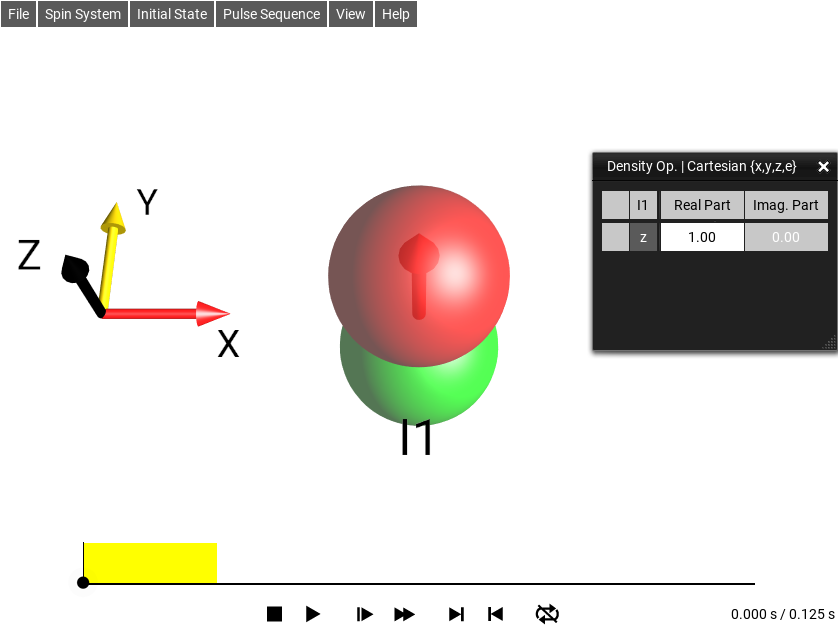 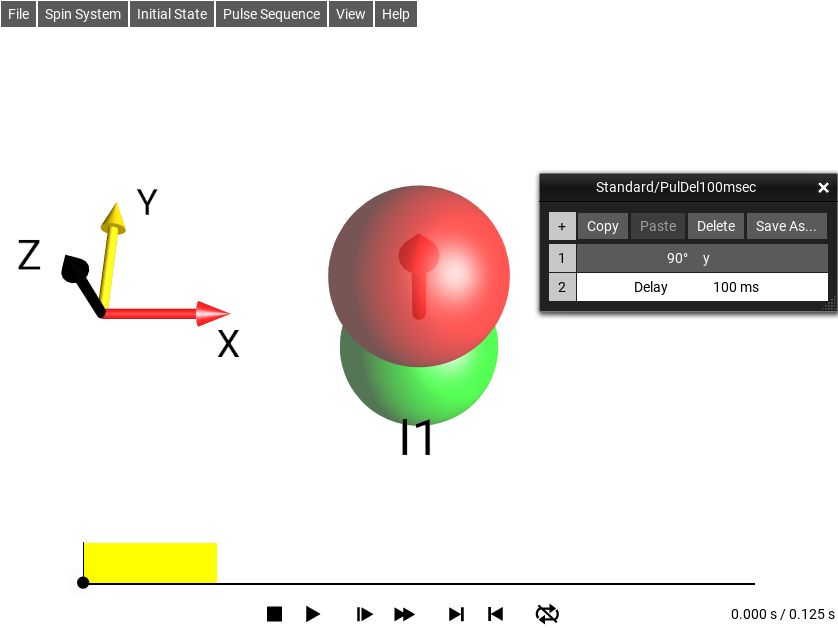 By default, the offset frequency of the spin I1 is ν1 = 1 Hz. This can be checked (or modified) by selecting Spin System ‣ Parameters…. 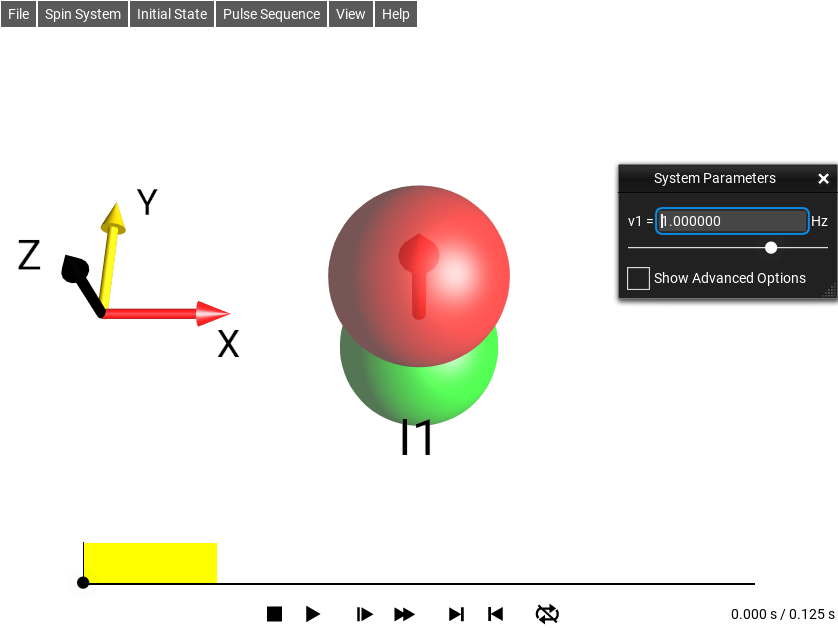 The displayed parameter and its current value is indicated above the slider: “v1 = 1.00 Hz”.

Pressing the play button at the bottom of the screen starts the simulation of the pulse sequence, and immediately shows the effects on the state. The pulse flips the spin by 90° around the y axis from z to x. During the delay, the spin rotates (precesses) around the z axis. The current time point is indicated by a circle and a vertical line. 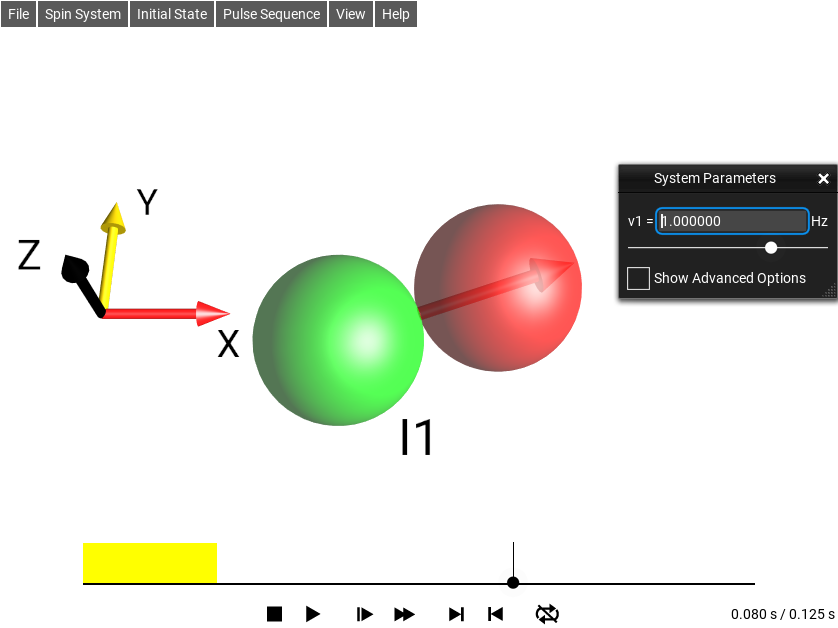 At the end of the sequence, the spin points along the x axis. As described in more detail in the Tutorial, the buttons at the bottom of the screen allow you to interactively control the simulation. For example, you can slow down or speed up the simulation or run the simulation in a loop. After stopping or pausing the simulation, you can change the current time point by moving the time cursor. 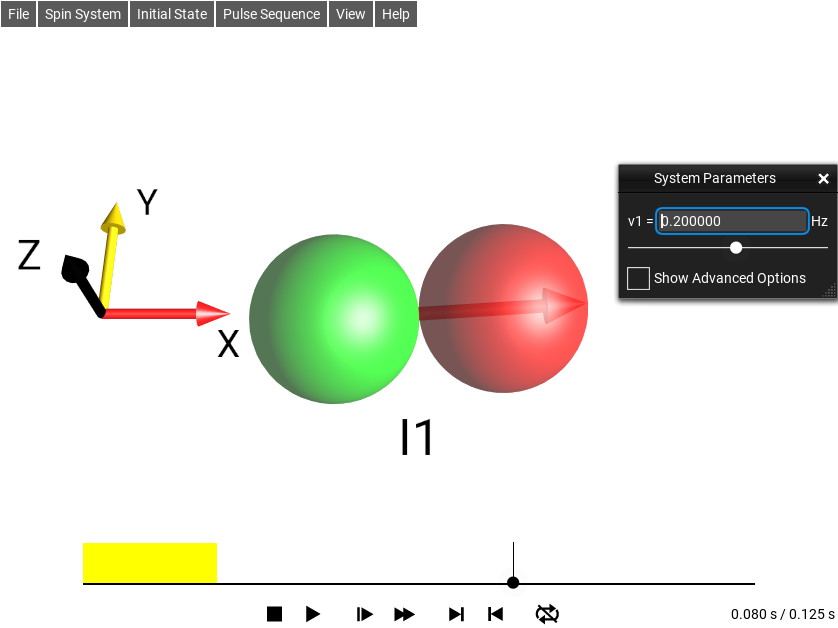 You can also change the offset frequency (i.e. the rotation frequency during the delay) interactively while the simulation is running and immediately see the effect of the parameter change. Here, for \(v1=0.2 Hz\), the magnetization vector at the end of the delay points closer to the x axis than was the case with \(v1=1 Hz\).

In this simple example, you learned how to define a spin system, the spin system parameters, the initial state, the pulse sequence and how to run and control the simulation. As we considered a single, uncoupled spin, the spin dynamics can be completely described by the well-known vector representation. In addition to the “magnetization vector”, the corresponding single-spin droplet (consisting of a red and green sphere) of the DROPS representation was displayed. Although this did not provide any additional information in this case, it is interesting to note that at all times, the magnetization vector is parallel to the corresponding droplet, i.e. to the axis formed by the centers of the green and red spheres. Hence, for the simple case of an uncoupled spin 1/2, the vector picture can be viewed as a special case of the DROPS representation. However, in contrast to the vector picture, the DROPS representation is not limited to uncoupled spins.

Predict the effect of the pulse sequence for different initial states and check your prediction by running the simulation.

What is the effect of the phase and/or flip angle of the excitation first pulse is modified?

Selecting Pulse Sequence ‣ Edit Sequences… provides the Sequence List, which in this case consists of two sequence elements: (1) The pulse 90°y and (2) the Delay 100 ms. If you double tap on 90°y, a sub menu opens in which you can change the flip angle and the phase of the pulse. In most cases, the pulses of interest will be 90° or 180° pulses, which can be chosen directly. If you would like to change the 90°y pulse e.g. to a 45°y pulse, select Other Pulse and enter the desired flip angle in the number pad.

In this example, we use the SpinDrops app to visualize the droplet of the +1-quantum coherence term \(I_{1}^{+} = I_{1x} + i I_{1y}\) and to see its evolution under z rotations. Choose Spin System ‣ 1-Spin and select Initial State ‣ I1(+). For the sequence, select Pulse Sequence ‣ z Rotation ‣ 360°(z) To see the corresponding Cartesian product operators, select View ‣ List Prod. Ops. 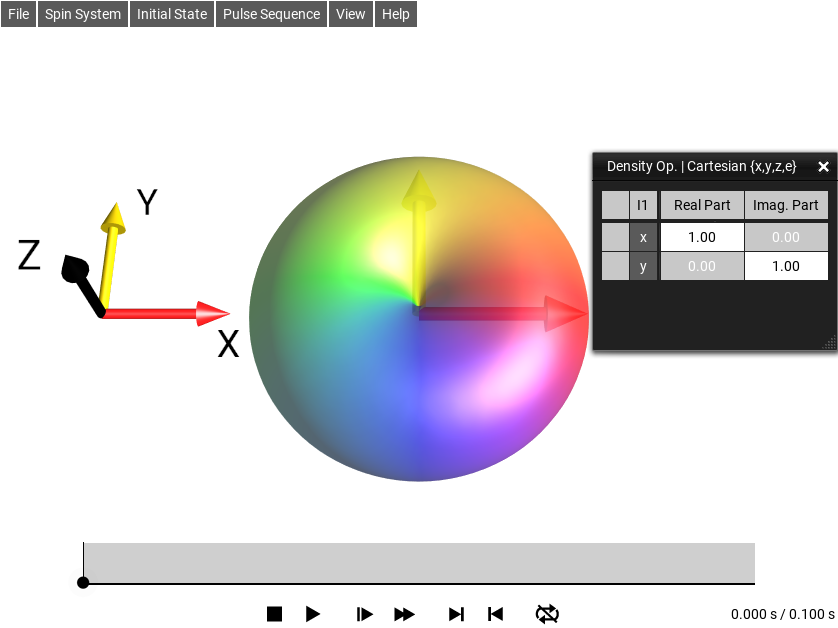 The left column of the list indicates the operator terms using the short-hand three-letter code (Cartesian Basis). On the right, the real and imaginary parts of the corresponding coefficients are displayed, which in general can be complex.

As the sequence progresses over time, the \(I_{1}^{+}\) droplet will rotate around the z-Axis.

Push the play button to run the simulation.

Initially, the droplet representing the linear spin operators of I1 shrinks and a new droplet emerges between I1 and I2, corresponding to the antiphase operator \(2I_{1y}I_{2z}\) (confirm using View ‣ List Prod. Ops. or using the right-hand rule). After 0.5 seconds (corresponding to \(1/(2 J12)\), the I1 spin droplet has completely vanished and the bilinear \(\{I1,I2\}\) droplet has reached its maximum size. 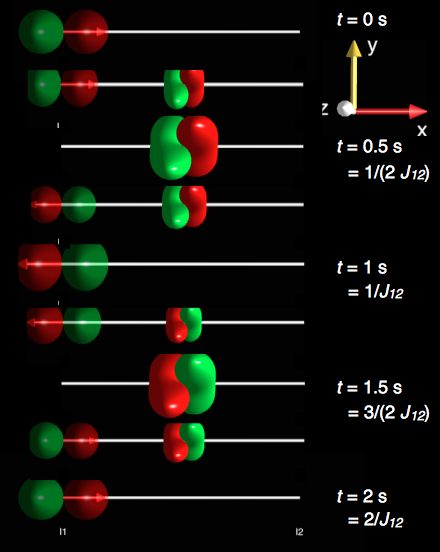 After 1 second (corresponding to \(1/J12\)), the \(\{I1,I2\}\) droplet vanishes and the I1 droplet reaches its maximum size again. However, notice that the sign of the I1 droplet (and of the magnetization vector) is inverted compared to the initial state at \(t = 0 s\). After 2 seconds (corresponding to \(2/J12\)), the initial state \(I_{1x}\) is reproduced. If the simulation is set to repeat mode, this will result in a continuous oscillation between the two droplets.

In this example, we illustrate the effect of 180° pulses on the evolution of a two-spin system. Select Spin System ‣ 2-Spin and set \(J_{12} = 1 Hz\) using the parameter slider (in Spin System ‣ Parameters…).

In this case, initial x magnetization of the first spin (\(I_{1x}\)) evolves under the weak coupling Hamiltonian during the delay \(T = 1/(2 J12)\) completely to the anti-phase operator \(2I_{1y}I_{2z}\). In the following, we simulate the resulting final state without and with additional 180° pulses in the center of the delay T, assuming a non-zero offset frequency of the first spin (\(ν1 = 0.5 Hz\)).

Fig. 198 [click to try (d) interactively in another window]¶

These results reflect the well-known fact that in case

The DEPT experiment (Distortionless Enhancement of Polarization Transfer) makes it possible to distinguish C, CH, CH2, and CH3 groups. The 1H spins are excited and the amplitude and sign of the detected 13C spin depends on the number of attached protons.

The basic pulse sequence of the DEPT experiment has the form

where the flip angle \(θ\) of the editing 1H pulse is 45°, 90° or 135° and the delay T is \(1/(2 J_{CH})\). The experiment relies on polarization transfer so that only signal originating from 1H polarization is detected on the 13C frequency. Hence, the spins of 13C atoms without attached 1H atoms do not yield any detectable signal. Predicting the 13C signals of CH, CH2, and CH3 is less simple.

As up to three spins 1/2 can be considered in the current version of SpinDrops, it is only possible to simulate the relative size and sign of of the final 13C magnetization for CH and CH2 groups (and hence of the relative size and sign of the corresponding 13C NMR signal), but not yet CH3. In the following, we will assume that spin I2 represents a 13C spin and spins I1 and I3 represent 1H spins:

Select Pulse Sequence ‣ Sequence List ‣ Heteronuclear ‣ DEPT-90 and run the simulation. Note that compared to the DEPT-45 sequence shown on the previous page, the flip angle \(θ\) of the editing pulse has changed from 45° to 90° (the yellow pulses). 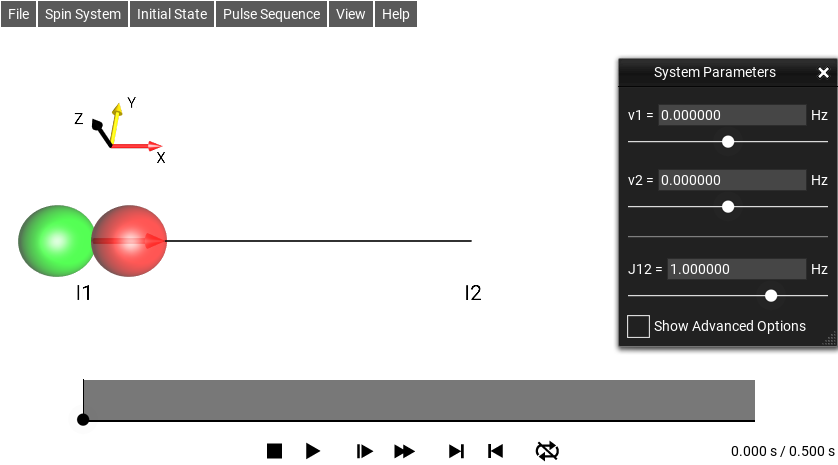 The isotropic mixing period is indicated by a grey rectangle. Set the coupling J12 to 1 Hz. (Here, the offset frequencies v1 and v2 are irrelevant as they are effectively suppressed by the isotropic mixing sequence.) Interestingly, after 0.5 seconds, corresponding to \(t = 1/(2 J12)\), the initial state \(I_{1x}\) has turned completely into \(I_{2x}\), i.e. x magnetization has been fully transferred from the first to the second spin). 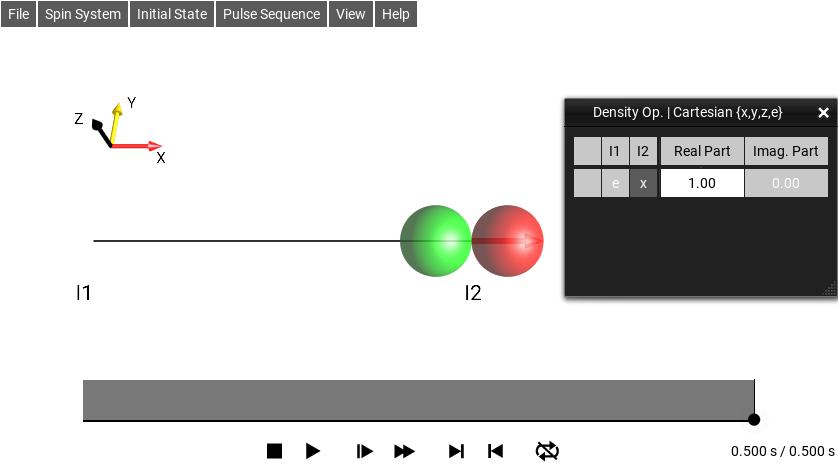 Under the isotropic mixing Hamiltonian, the initial state

This can be verified by using Figure Fig. 207 as a starting point, and extending the duration of the isotropic mixing period to \(1 s\) (or more, by selecting Pulse Sequence ‣ Edit Sequences…, double tapping Hiso12, and changing the pulse length from 0.5/J12 to 1/J12.) 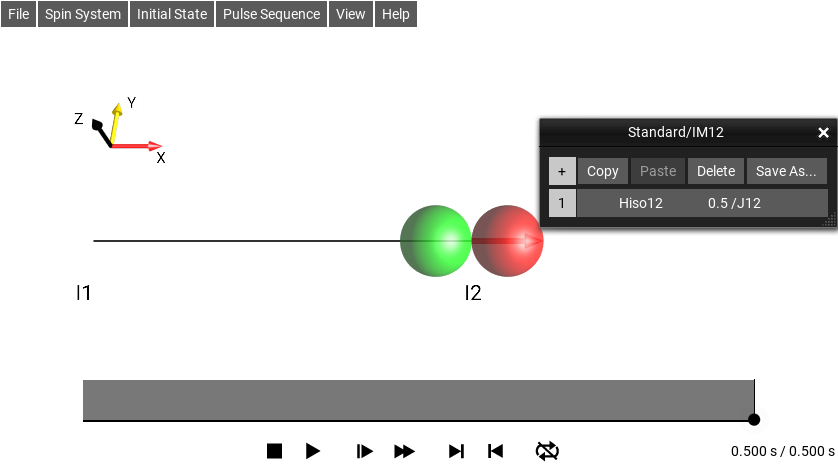 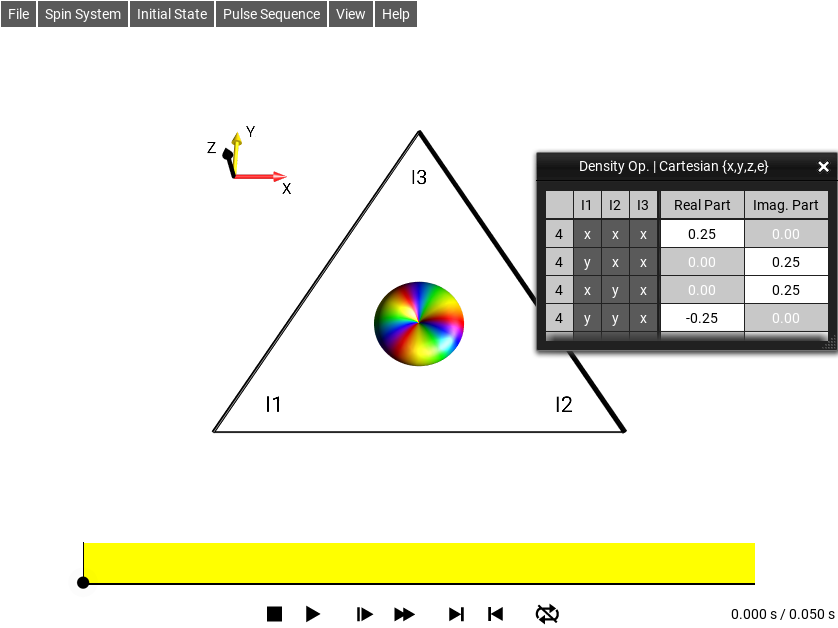 In addition to the initial orientation of the droplet, the snapshots show its orientations after rotations of 45°, 135°, and 180° around the y axis.

The fact that this operation also inverts the coherence order from \(p=+3\) to \(p=-3\) can be inferred from the direction of the rainbow colors of the initial and final droplet orientations. However, this can be seen more directly by separating the droplet according to coherence order \(p\): 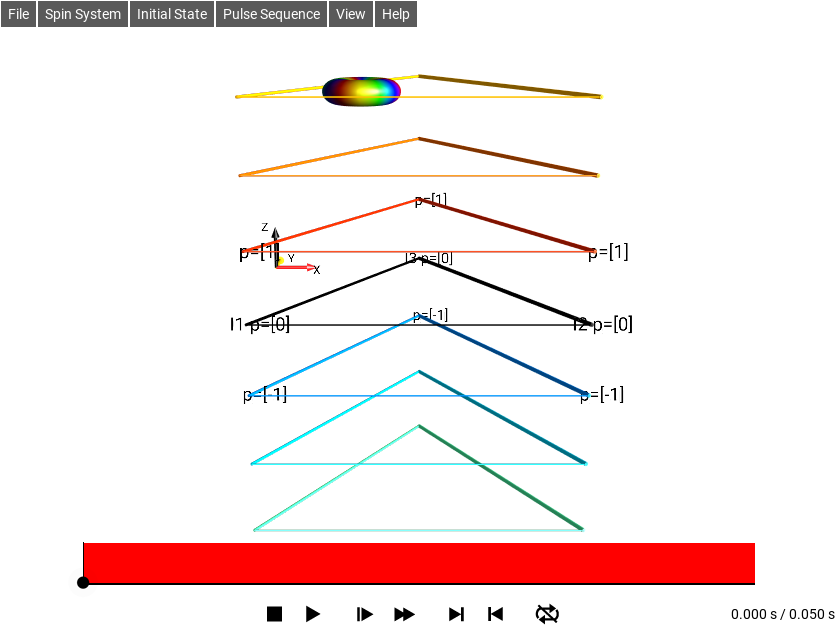 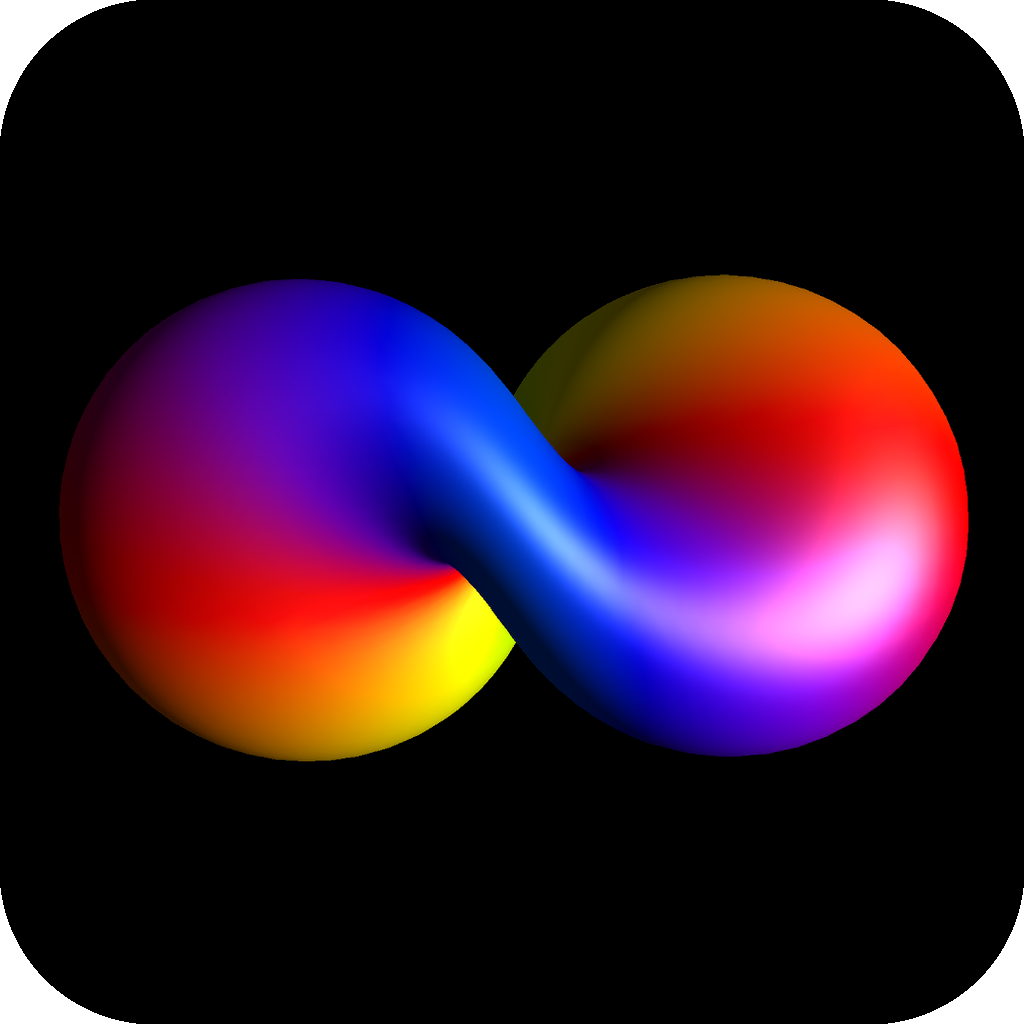